A little over a year later, the pastry chef from Irasburg is again on a national television cooking show and changes his business.

Earlier this spring, McCurdy earned himself (and his mother) a chance to win the $100,000 prize on Fox’s all-new “Crime Scene Kitchen.” The cooking competition is hosted by actor Joel McHale with celebrity judges, chef Curtis Stone and pastry chef Yolanda Gampp. The first episode airs Wednesday, May 26 at 9 p.m.

McCurdy spoke by phone with Seven days while looking at “a pile of piglets sleeping in the sun and a greenhouse full of flowers” at the farm in the North East Kingdom which he co-owns with her husband, Bailey Hale.

SEVEN DAYS: Before going on TV, can you give us an update on your food business?
THOMAS MCCURDY: When I transferred all bakery operations to what we called Kingdom Direct, the prepared food and meal delivery business, we were thinking: OK, maybe for a few months, we’ll do this until this COVID thing goes away. But then, reduced to a year later, I was still going strong. I [had] hired a few new employees and bought a refrigerated delivery van and was really successful. And then I got really tired. I don’t mean burned, but pretty close. 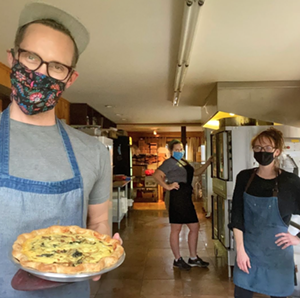 Almost a year after launching Kingdom Direct, I closed it down and sold my commercial kitchen equipment. I moved out of my rented kitchen space that I have lived in for six years. I turn the page to the next chapter and it feels good.

For now, the plan is just to spend the summer on our farm and help Bailey in the greenhouses grow flowers, re-grow a good vegetable garden. We do another round of cows, pigs and chickens. I just can’t wait to slow down.

As much as I loved delivering food and prepared meals to people’s doorsteps, I realized how much it nourishes my soul to share food with people together, face to face. For 2022, I hope we can resume our events on the farm.

SD: Now tell us how you landed on “Crime Scene Kitchen”.
TM: I’m on the mailing lists of all kinds of casting agencies. Emails always come in like “I’m looking for a nurse in the tri-state area who really wants her house decorated for Christmas.” Ninety-nine out of 100, I don’t even think about it. But every once in a while, one catches my eye.

[This one] was very, very vague, there were hardly any details, just a new show. “Are you a professional baker or a skilled baker who is good at riddles and reading clues and things like that?”

I love puzzles. I always read detective novels and love movies about detectives and private detectives. It just sounded like it could be up my alley. It all happened pretty quickly. I expressed my interest and then before I knew it, I was in California filming this new show.

They were casting a team, a pair. So I called my mom and said, “Here’s the opportunity. Here is [the] very few details I have. It could be fun. What do you think?” And she said, “Oh no, absolutely not,” and immediately started listing all the other people in my life that I should call instead.

My mother is an amazing cook and baker and she is such a hostess. She didn’t really give herself enough credit. When I called her back a few days later, I couldn’t even finish her sentence before she said, “I’m in.”

SD: The concept is quite original, like in cooking shows.
TM: Each episode contains two rounds of cooking [during which] each team of bakers enters a kitchen in which an item has been baked, but the item is no longer there. The contestants have a very limited time to scour the kitchen or the crime scene to find all the clues. Clues can be crumbs on the counter or residue on dirty dishes, items in the fridge or freezer, [in the] waste. Then [they] try to interpret these clues to determine what was done in that kitchen – then do it.

SD: After “Chopped Sweets”, you said Seven days that you thought you should have had more fun with. Did you succeed this time?
TM: I can say that I came into this experience really wanting to relax and have fun. I took it seriously in the sense that I wanted to do well, but I didn’t take it also seriously. Whether I succeeded or not is to be determined [laughs]. But it was fun, and having my mom there was such a trip.

SD: I know you can’t tell us how you did it, but you and your mom are still talking?
TM: We are speak again. We’ve always been close, but we only see each other once, maybe twice a year. To have this long period of time together, we really got to know each other on a whole different level.

SD: You talked about doing your own TV show, something like Martha Stewart Meets the Pioneer Woman. Now that you’ve done two different shows, what do you think?
TM: It’s not something I think I’ll be pursuing anytime soon. However, if I were to get a call today from a production company saying, “We want to send someone over to film a little sizzle reel of you and Bailey and have you have a farmhouse brunch in your barn of event for a possible new show”, I would say “yes” in the blink of an eye.

This interview has been edited and condensed for clarity and length.